Palmer portrays the role of The Android in Dark Matter.

Born in Camborne, Cornwall, England, to parents of British and Irish descent, Palmer was nine years old when she moved with her family to Canada,[1] and grew up near Lake Simcoe in Georgina, Ontario, Canada.[2]

She attended Sacred Heart Catholic High School in Newmarket, Ontario; and graduated from York University in Toronto, Canada, with a Bachelor of Fine Arts in 2001.[3]

Palmer's first professional experience as an actor was as a teenager in summer stock at The Red Barn Theatre in Jackson's Point, Ontario, Canada.[4]

Her sister, Tracey (Palmer) Weiler, was a Progressive Conservative Party of Ontario candidate (Kitchener-Waterloo electoral district) in a 2012 by-election for the Legislative Assembly of Ontario, and the 2014 general election. Palmer lent her star-power to a crowdfunding campaign organized by her sister to raise funds for a popular children's attraction at the Winterloo Festival 2015 for families in the Waterloo Region (sold out perks included 100 autographed pictures and 25 one-on-one Skype calls lasting 10-15 minutes).

Zoie Palmer came out publicly on stage at the Canadian Screen Awards when after receiving the "Fan Choice Award for Favourite Canadian Screen Star" she thanked, "my incredible partner, Alex, and my beautiful son Luca."[5]  [Alex Lalonde is a Canadian producer. Her film credits include The Whistleblower (2010) and The Lesser Blessed (2012).]

Palmer is best known for her portrayal of Dr. Lauren Lewis in the Canadian supernatural drama series Lost Girl.

Television work includes the critically acclaimed made-for-TV movies The Reagans (2003) as Patti Reagan, and Out of the Ashes (2003) as Didi Goldstein. Guest appearances include the Citytv crime drama Murdoch Mysteries in the episode "Victor, Victorian" (2010) as Katie Powers, a member of a group of women posing as men; The CW American espionage drama Nikita in the episode "Girl's Best Friend" (2011) as Anya Vimer, a terrorist who tries to sabotage a peace summit; HBO Canada comedy Call Me Fitz in the episode "Don of the Differently Abled" (2011) as Laura, an unhinged amputee with plans for an escort service for disabled people; CTV science fiction crime drama The Listener in the episode "The Shooting" (2012) as Staff Sgt. McCoy, an investigator for Internal Affairs. Palmer had a recurring role in the CTV teen drama/comedy Instant Star as rock singer Patsy Sewer (2006-2007); she was a co-lead in the Global drama The Guard as Coast Guard rescue specialist Carly Greig.

Film roles include Annabelle in the short drama Terminal Venus (2003), in which she played a woman coming to terms with cancer, for which she was awarded "Best Actor" at the 2004 Baja Film Festival (Mexico);[6]  Angie in the Genie Award nominated short drama Snapshots for Henry (2006); Haley in the romantic comedy The Untitled Work of Paul Shepard (2010), for which she received a 2011 ACTRA Award nomination for "Outstanding Performance – Female"; [7]  Officer Frances Jane in the crime thriller Cold Blooded (2012), for which she was awarded the "Gold Medallion Acting Award for Best Actress in a Feature Film" by the 2012 Bare Bones International Film Festival;[8]  Lou in the comedy Sex After Kids (2013); and Bethany in the fantasy adventure Patch Town (2014).

Palmer won the "Fan Choice Award for Favourite Canadian Screen Star" by the 2014 Canadian Screen Awards;[9]  and was named "Number 1" on the list of homegrown talent by HELLO! Canada magazine in its 2014 edition of "Canada's 50 Most Beautiful" celebrities.[10]  She is winner of "Favorite TV Actress" by the 2013 AfterEllen Visibility Awards;[11] "Best Sci-Fi or Fantasy Actress" in Best of TV Awards 2013 by Canadagraphs;[12] and "Girl on Top 2013" (Favorite TV Leading Ladies) by E! Online (E! Entertainment Television).[13] 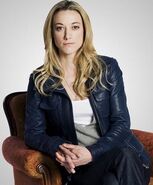 Retrieved from "https://darkmatter.fandom.com/wiki/Zoie_Palmer?oldid=13968"
Community content is available under CC-BY-SA unless otherwise noted.