Wil Wheaton is an actor known for playing Wesley Crusher on Star Trek: The Next Generation, and as Gordie Lachance in Stand by Me (1986). He is also known for being the creator and host of TableTop.

Wil Wheaton's acting debut arrived in the 1981 television film "Along Way Home". Later, starting in 1987, he began to portray his most known portrayal as Wesley Crusher in Star Trek: The Next Generation. 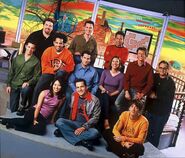 Retrieved from "https://darkmatter.fandom.com/wiki/Wil_Wheaton?oldid=14372"
Community content is available under CC-BY-SA unless otherwise noted.