Volkov-Rusi is a corporation seen in Season 1 of Dark Matter.

Volkov-Rusi Corporation, (also known as Volkov-Rusov Industries), is one of the major multi-planetary corporations.[1]

In Episode Eleven, Wexler's group was revealed to have been working for Volkov-Rusi. The Corporation sent a ship to meet up with the Raza to accept the cargo stolen from Traugott Corp's Research Facility. They sent in teams when Wexler's crew started having trouble with Portia Lin and Das. When Portia killed their teams and retook the ship from Wexler Volkov-Rusi decided not to put up anymore of a fight and left. 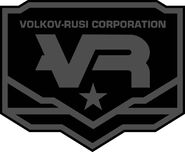 Retrieved from "https://darkmatter.fandom.com/wiki/Volkov-Rusi?oldid=11055"
Community content is available under CC-BY-SA unless otherwise noted.