Traugott Corp is a corporation seen in Season 1 and 2 of Dark Matter.

Traugott Corp is one of the major multi-planetary corporations. It is responsible for the research that accidently caused the Taurian Alpha Virus which is one of the most deadly viruses ever seen.

In Episode Five, it was revealed Traugott Corp had tried to synthesize a drug to create immortality, but instead accidently created the Taurian Alpha Virus. A virus that causes people to turn into mindless cannibals.

Episode Ten and Eleven revealed Traugott Corp has several rivals willing to steal scientific advancements from their Research Facility. These rivals include the Mikkei Combine and Volkov-Rusi.

The Raza crew and Wexler's gang were both hired by the rivals to steal Traugott's illegal White-hole technology from one of their research stations. They were successful and eventually the Raza was able to give the technology to the Mikkei Combine's research facility. However, moments later the device exploded the whole planet.

In Episode Twelve, Portia Lin came to the conclusion that the white hole device exploding was intentional, and that it was Traugott corps way of testing out a White hole bomb. That word of their technology was intentionally leaked out so that a different corp would take the bait and be held accountable instead of them, when it comes to the Galactic Authority.

In Episode Fifteen, Traugott corp is shown that they have some sway with corrupt Galactic Authority officers, as they are also responsible for the assassination attempts against the crew of the Raza in Hyperion-8.

In Episode Twenty-Six, Traugott corporation is part of the Council of Corporations. Traugott had delegates on EOS-7 when it had been attacked by Ryo Tetsuda. 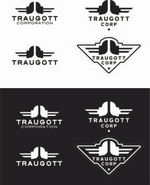 Traugott Corp Warning System
Add a photo to this gallery

Retrieved from "https://darkmatter.fandom.com/wiki/Traugott_Corp?oldid=14375"
Community content is available under CC-BY-SA unless otherwise noted.