The Android, also known as Kiva Ehrens, is a main character appearing in Season 1, 2 and 3 of Dark Matter. She is portrayed by Zoie Palmer.

The Android is an outsider, constantly searching for acceptance from the crew. She has a child-like demeanor, desperate to fit in. As she engages with the crew she will both grow and learn to understand human actions and emotions. In Season 1 of Dark Matter, the Android is first encountered by a member of the Raza's crew, Marcus Boone.

In Episode One, when the Android first awoke she attacked the crew. After being shut down, repaired and her security protocols deleted she is awoken again, this time without knowledge of the attack. She also doesn't know her own designation. Later, after looking through the Raza's data she recovered the knowledge of the identities of most of the Raza crew, except for herself and Das as neither of them were on the Galactic Authorities Most Wanted List.

She has an encounter with Five later, as she can tell something is wrong with her through reading of Body Language and Pheromone levels. Five engages her saying that she is upset because she doesn't have a profile. Before she leaves, she tells the android that telling people she can smell their pheromone levels won't win her any friends.

In Episode Seven, The Android displayed some jealousy when the crew started to greatly appreciate their newest android Wendy. She tried to get some attention when she told the crew that she fixed and improved the Raza's cooling system and that it would have crippled the ship had she not gotten to it in time. The crew instead, seemed more taken by the improved taste of the food Wendy had prepared for them. She then tried changing her voice accent settings to sound more pleasing to the crew, who seemed to enjoy Wendy's Aussie accent.

Later, The Android tried to become friends with Wendy. However, Wendy instead shot the Android, which shut her down.

In Episode Ten, The Android created a simulated projection of herself. She requested the projection observe and record her actions in order to determine whether she had a flaw in her personality matrix. After the crew returned from completing their heist, Wexler approached The Android on the bridge. He spoke to her for a few moments before disabling her with his weapon. Two found The Android lying on the floor of the bridge before she was also incapacitated by Wexler.

In Episode Twelve, The Android travelled down to Dwarf Star Technologies research planet to save Portia Lin. Later, back on the Raza, The Android was attacked.

In Episode Seventeen, The Android visited Janah-12 station to observe human behaviour. While hanging out at GREGG & CO, she was confronted by a guard and questioned. Victor stepped in and pretended to be her owner and claimed she was from his ship Ophiuchus. He questioned the guards intentions until he left. The Android finally revealed to him she was shoplifting a toothbrush as a gift for a friend but claimed she'd pay the store back once she got to the Raza. Victor instead choose to buy it for her and asked her to come with him, to which she agreed.

Victor introduces the Android to his friends that are all androids, and reveals her emotional nature to them. Stating she's special like them. He gives the Android one of their upgrades that would allow her to act more human. The Android expresses her thoughts that she might be flawed, in response to which Victor runs a diagnostic, then takes her shopping. He buys her human clothes and a dress. After their shopping is done, Victor tells the Android that it's time they part ways. She requests to have him meet her crew, to which Victor replies that humans can't be trusted, however he hopes for her sake that her crew can be, even though he doubts it. He then asks her to consider what she's learned and to free herself before it's to late.

Victor gives the Android her diagnostic results and reveals she is different but it's not a programming error. Her emotional responses are the result of intentional design. This makes the Android view herself as imperfect, however Victor claims this is what makes her special. He then asks to kiss her and she agrees. They then part ways.

In Episode Eighteen, The Android uses her upgrade to infiltrate a Galactic Authority police station. She purposely gets into trouble so she can plant a bug, and uses the cover name of Kiva Ehrens. The information the Android discovered revealed that the Jace Corso shot One, and was hiding out in an abandoned settlement. She finds and beats up Danny Bones, who knows where Corso is, and takes him to the Raza for questioning. By the end of the op, The Simulated Android informs her that she's been making mistakes and that it will only get worse.

In Episode Thirty, the Android teaches Three French, which he was stuck in his time loop. They also have a French band in one loop. Later, the Android thought she found a way to stop the loop but ended up launching herself through different points in time instead.

In one time she's mourning and crying in grief, in another she's being disassembled, and another time far in the future with an old Five. Five tells her to destroy the device to end it. Before she leaves Five informs her of several things to come: Dwarf Stars conspiracy, the double deception, Kryden, Carina, the Accelerated, the fall of the house of Ishida, a meeting with the Android's creator, and the Black Ships. After the time trip The Android destroys the device returning things back to normal.

The Android is tall with dark blond hair which is kept in a bun atop her head. She has a pale complexion with a tattoo on her neck. She has a slim, muscular build and brown eyes. 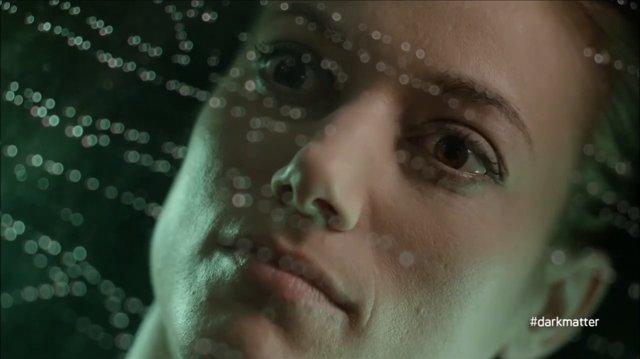 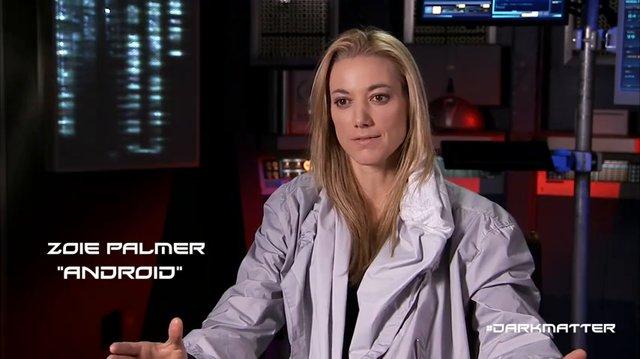