Portia Lin, also known as Rebecca and Two, is a main character that appears in Season 1, 2 and 3 of Dark Matter. She is portrayed by Melissa O'Neil.

Two is tough both inside and out. She has the true makings of a leader, showing both strength and compassion. She is also determined and headstrong and won't let anyone or anything stand in her way.

In Episode One, Two displays strong fighting skills which indicate she may have had training in the past.

Episode One also revealed Two is on the Galactic Authority's Most Wanted List for murder, assault, arson, theft and piracy, and that she used to be called Portia Lin.

In Episode Two, Two is notably distressed by the information The Android recovered about her. She refuses to answer to the name Portia, requesting to be addressed as Two as though she is attempting to distance herself from her past. [1]

In Episode Five, it was revealed that Two and Marcus had been having a relationship. After getting a mission from their handler, Two boarded the freighter Far Horizon. While on the freighter, she was attacked and bitten by a person infected with the Taurian Alpha Virus. She was brought back to the Raza and placed into quarantine where a scan verified the presence of a Taurian Alpha Virus infection. Two had an anxious wait throughout the incubation period, but when symptoms of the virus failed to manifest, she was retested and cleared of any infection. She later went to visit Marcus in private, but he resisted after what had happened to her. She left and removed her bandage revealing her bite wound had miraculously healed.

In Episode Ten, Two was blown into space after a group of mercenaries the team had been working alongside on the orders of Commander Delaney Truffault turned on the team.

In Episode Eleven, it was revealed that Two had managed to survive being blown into space due to the fact that she was a very advanced synthetic. With Five's help, the two were able to take back the ship. Subsequently, the majority of the crew excluding One and Five distrust Two, mainly displayed by Three.

In Episode Twelve, it was revealed that Two was the intellectual property of Dwarf Star Technologies. Alex told her she is a perfect creation that can withstand any injury but she has a neural flaw that makes her prone to violence. She also has to age to avoid suspicion from the GA so she isn't hunted down since she is illegal technology. She also learned her original name was Rebecca before she changed it to Portia Lin.

In Episode Fourteen, Two was brought to Hyperion-8 as a Galactic Authority prisoner with Three and Four. While there Three gets in several fights ending with Nyx Harper, whom Two steps in and defends Three. They both fight and are soon incapacitated by head guard Durand. Their both put in solitary and both hang out in the Sim Yard where they became allies. Later, One is killed, whom Two had been in a relationship with.

In Episode Twenty-Two, it was revealed Two's nanites had been slowly losing power and getting worse, leaving her to a slow death. The Raza crew went to a Dwarf Star Technologies Station on Earth to get her a new generation of improved nanites. During the preparation of the heist she was reacquainted with her past friend Eric Waver. The only survivor Rebecca had left from her first escape from DST, due to his compassion for her. He and his co-workers aided the group with the break in.

While getting the nanites she was confronted with Rook who now viewed her as a failure to his career and had his new prototype attempt to kill her. Ryo intervened and killed the prototype and Six used its upgraded nanites to revive and heal Two.

In Episode Twenty-Three, the ship is infected with a virus that causes hallucinations through the neural link. Two has a hallucination of iron-masked people who seem to be sent by Rook. They want to put her in a torture chair. Six and Nyx snap her out of it.

The Simulated Android attempts to kill the crew and disable the ship, starting with venting toxic gas from the coolant system. Two goes to the computer core to stop the virus, only for her protective suits magnetic boots to be activated by the virus, stopping her from completing the deed. However, the Android manages to pull the core and the Simulation disappears.

In Episode Twenty-Six, Two and her crew sneak onto EOS-7 and stop Nieman from destroying the station. However, Ryo overloaded the Station regardless while Two was still on board.

In Episode Twenty-Seven, Six found Two and got her onto The Marauder. The shuttle had no power, navigation, and comms. After they managed to get communications back online, they contacted the Raza, however they couldn't pick them up yet. They did however learn that Nyx was dead and the Android believed Ryo did it. Two questioned how Ryo could have killed her, due to the relationship they had.

Later, Six tells Two that he was sorry for turning them in. Two responds that she knew he thought he was doing what he thought was right at the time. She concludes that doing the right thing isn't always right. She thinks who they used to be is still influencing their present decisions. That they keep fighting their pasts to be better but they keep failing. Six concludes that all that matters is that they keep trying. It's who they are.

As Two's oxygen runs thin, Two hallucinates Nyx. She tells her she's sorry and admits her guilt. She feels upset that she hadn't looked out for her crew as well as she could have. That she hadn't done her job well enough for One or her. She also felt guilty for risking the crew's lives when she could have just let the GA handle the corporations instead. She also admits being a better person then her past self is so much harder.

Two and her Nyx hallucination say their goodbyes. She told her she's sorry they hadn't had more time to get to know each other and that she was going to miss her. Two then resigns herself that the crew isn't going to make it and that she may die. Nyx then tells her a final goodbye and they share a kiss, before Two passes out.

Two is then rescued and soon she shares a chat with Commander Truffault about the foreseeable future of Mikkei Combine. Truffault helps her understand what it means to be a leader and that you have responsibilities as a Commander, but with that you shouldn't let the guilt of past decisions become a hindrance or you'll never move forward. Afterwards, Two has a meal with the crew. They discuss what's next for them and Two decides they need to take back the blink drive, then kill Ryo Ishida.

Two is medium height with long black wavy hair. She has dark brown eyes and strong features. Two has an athletic build which is demonstrated during her fight scene in Episode One. 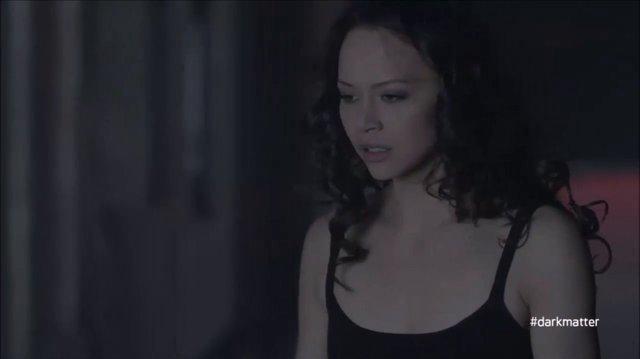 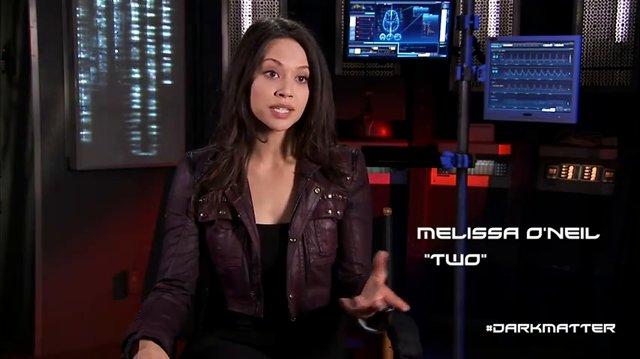 Retrieved from "https://darkmatter.fandom.com/wiki/Portia_Lin?oldid=13906"
Community content is available under CC-BY-SA unless otherwise noted.