Pat Mastroianni is an actor known for Degrassi: The Next Generation, Degrassi High and Liberty Street.

Mastroianni was born in Toronto, Ontario. At 13, he tried out for the Degrassi series, and was subsequently cast as Joey Jeremiah. In 1988, Mastroianni won a Gemini Award for Best Continuing Actor in a Supporting Role. After Degrassi High ended in 1992, Mastroianni worked as a waiter and a painter in his father's construction business, and gave up college for acting when his university mandated that he devote all his time to his studies.

He had roles in several Canadian productions, including Liberty Street and Music Works. Though he was quoted as saying in 1998 that there was "very little" chance for a Degrassi sequel, Degrassi: The Next Generation began in 2001, where Mastroianni reprised his role as Joey for five seasons. He announced on his website that after three seasons of Degrassi Junior High, two more of Degrassi High and five seasons of Degrassi: The Next Generation he is no longer going to portray Joey Jeremiah; he wanted to continue his acting career on other projects.

Mastroianni continues acting and living in Toronto. He is of Italian heritage. Mastroianni was a guest star on the supernatural medical drama Saving Hope. 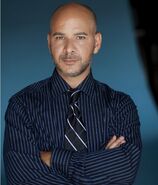 Retrieved from "https://darkmatter.fandom.com/wiki/Pat_Mastroianni?oldid=7713"
Community content is available under CC-BY-SA unless otherwise noted.