Melissa portrays Portia Lin in Season 1, 2 and 3 of Dark Matter.

O'Neil was born and raised in Calgary, Alberta, and attended Terry Fox Junior High School before studying at Lester B. Pearson High School. Prior to her Canadian Idol experience, she had worked at a daycare centre, and had also been involved in local musical theatre productions. Her maternal grandfather gave her a Chinese name (Chinese: 奧詩敏). [1]

Immediately after her win on Canadian Idol, O'Neil received a congratulatory phone call from the Canadian Prime Minister Paul Martin. She then signed a recording contract with Sony BMG Canada and released her first single "Alive", which hit stores on October 4, 2005 and debuted at number one on the Canadian singles chart, a position it held for four weeks. The single went on to be certified four-times platinum by the CRIA.

Her self-titled debut album Melissa O'Neil, was released on November 22, 2005 and debuted at number sixteen on the Canadian albums chart. The second single from her album, "Let It Go" was released in late 2005 and peaked at number seven on the singles chart. On February 7, 2006, O'Neil embarked on her first solo tour in North Bay, Ontario, named the 'Let It Go Tour' after her second single. Her support act was her Canadian Idol runner-up, Rex Goudie. The third single release from O'Neil's album was "Speechless", which peaked number thirty-one, significantly lower than her two previous songs but still respectable nonetheless. In March 2006, her debut album was certified gold by the CRIA for 50,000 units shipped, and her first single "Alive" was covered by Becki Ryan in the movie Flicka. On September 16, 2006 O'Neil returned to the Canadian Idol stage during grand finale of its fourth season. Here she was surprised with the certified gold presentation disc of her debut album.

On April 1, 2007, O'Neil attended the annual Juno Awards, where she was nominated for Best New Artist. Ironically, one of the other nominees was her Canadian Idol successor, Eva Avila. However, Tomi Swick took home the award. Since then, O'Neil stated that she was working on her second studio album, which she aims to illustrate her full musical aspirations, and allow her to grow as an independent, imaginative artist. She starred in the musical of Dirty Dancing in Toronto, Ontario as a featured singer. She then played the role of Gabriella in High School Musical On Stage with Drayton Entertainment in St. Jacobs and Penetanguishene and was featured as a lead in the Stage West Calgary production of "British Invasion", alongside former lead singer of The Guess Who, Terry Hatty. O'Neil made her Stratford Shakespeare Festival debut during the 2011 season as Martha/Maid by the Fire in Jesus Christ Superstar and she made an appearance in Camelot. She played Eponine in a sit-down production of Les Misérables in Toronto at the Princess of Wales Theatre, which ran from September 2013 through February 2014. For this performance, she won the Dora Award for Outstanding Female Performance. [2] O'Neil later served as both a member of the ensemble and an understudy for the roles of Eponine and Fantine in the Broadway revival of Les Miserables, which opened March 2014. [3]

In December 2014, she was cast in the role of "Portia Lin" aka "Two" for a new television series based on the graphic novel Dark Matter.[9] 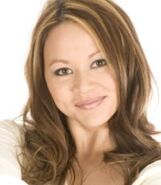 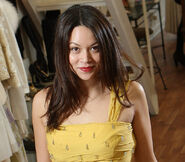 Retrieved from "https://darkmatter.fandom.com/wiki/Melissa_O%27Neil?oldid=14224"
Community content is available under CC-BY-SA unless otherwise noted.