Marcus Boone, aka Three and Titch, is a main character that appears in Season 1, 2 and 3 of Dark Matter. He is portrayed by Anthony Lemke.

Marcus Boone, aka Three and Titch, is rough, cocky, and exhibits a strong sense of self-preservation. Marcus is experienced with a wide range of firearms. In Season 1 of Dark Matter, Marcus wakes on board the Raza with no memory of who he is or why he is on a ship. He learns that he is among five other crew members and one android.

Prior to being on the Raza, Marcus was a mercenary for hire. He lived with his girlfriend Sarah on her farm until she became ill with Tataryn's disease.

Episode One revealed Marcus is on the Galactic Authority's Most Wanted List for murder, assault, kidnapping and piracy.

Episode Seven revealed Marcus used to be a mercenary for hire. He received a job from one of Ferrous Corps rivals to steal a shipment of Cyrillium from one of their planets. The job didn't go well and some of his crew died. He was badly injured and when he didn't make it to the meet up point he was assumed dead. A farmer named Sarah found him and nursed him back to health. The two fell in love and Marcus decided to stay with her. When her Tataryn's disease grew worse Marcus placed her in a stasis pod telling her everything would be okay. He had placed her in the Raza, in the locked room.

Later, when they found Sarah and defrosted her, she told Marcus about the two of them. Soon her disease progressed and Marcus placed her back into her pod vowing he'd find a way to cure her. Unfortunately, a power failure caused her pod to shut down, and without it on the disease was left to run it's course, killing her.

Episode Eight revealed that Marcus is a suspect in the death of Catherine Moss, One's wife. Marcus doesn't know about this.

Episode Seventeen revealed that Marcus's name was originally Titch. When he was young his family was killed by Larcan Tanner, who decided to spare Marcus and raise him as his own. Tanner claimed that Titch knew he was the one who had killed them all along but had forgiven him back then. They got separated by on Sarah's Planet, when Marcus's old gang thought he was dead.

After seeing how ruthless his former crew was, after killing a man they had kidnapped the son of, and realizing it was Tanner who had murdered Marcus's own parents, Marcus killed Tanner and the rest of his former gang.

In Episode Twenty-Two, Two's nanites began to fail. The Raza crew had to go to a Dwarf Star Technologies Station on Earth to get her better nanites. During the heist Marcus and Six where captured. Alexander Rook took Marcus and made him a host in an attempt to sabotage the Raza. When the crew made it back after Two was given the new nanites, Six noticed Marcus's change in behavior and him and Two caught Marcus at the Blink Drive.

After realizing something was inside of him, they attempted to put him into stasis only for it not to have worked, as t began it's escape and left Marcus's body. The creature was vented into space and Marcus shortly recovered, not remembering anything of the incident.

In Episode Twenty-Three, Three's past girlfriend Sarah, appeared to Three via his neural link to the Raza while it was under siege by a virus brought by the alternate universe Delaney Truffault. Sarah tells Three that they can be together again in a place with no pain or loneliness. She convinces Three to kill himself with a shot to the head. Right as he pulls the trigger, Six manages to intervene and Sarah disappears.

Later, Three is put under pressure to kill The Android, who the crew believes is the source of the Virus. Three tries to convince himself that she's just a machine. In the end he's told to stand down and the crisis is averted.

In Episode Twenty-Four, Five is kidnapped and Three rescues her on his own and he ends up getting shot in the process. With the Galactic Authority in pursuit, the two flee together. Eventually, Three gets caught by the GA and is threatened with the Raza crew in The Marauder being shot down unless he informs them of the event that took place on Iriden 3. Three gives in and tells them the White hole bomb was originally stolen from Traugott Corp. Afterwards, Three is rescued by the crew.

In Episode Twenty-Nine, Marcus learned that Five saved his girlfriend Sarah, and that she is alive within the Raza's computer as a digital consciousness.

Marcus is tall with messy, dark brown hair. He is of muscular build and has light stubble on his chin and upper lip. He has a scar on one of his cheeks. 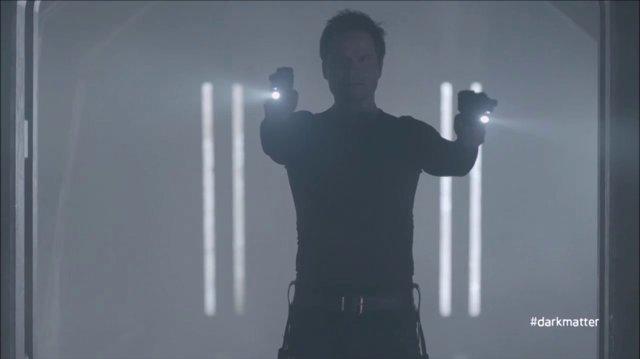 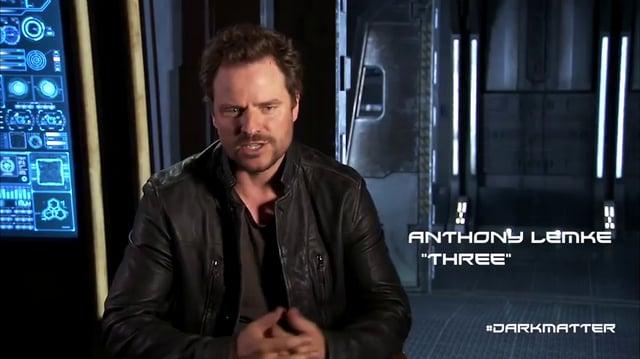 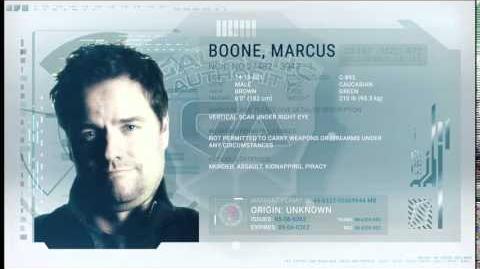 Retrieved from "https://darkmatter.fandom.com/wiki/Marcus_Boone?oldid=13891"
Community content is available under CC-BY-SA unless otherwise noted.