Kal Varrik, aka Griffin Jones, aka Six, is a main character that appears in Season 1, 2 and 3 of Dark Matter. He is portrayed by Roger Cross.

Kal Varrik, aka Six, aka Griffin Jones, may look intimidating, however, he has a heart of gold. He is extremely intelligent and has the ability to handle issues and disappointment with strength and grace. Despite his memory loss, he has demonstrated a singular aptitude for piloting the Phantom class shuttle Marauder.

Prior to being on the Raza, Kal was an undercover cop for the Galactic Authority. One of his missions was to go undercover within the Procyon Insurrection with his friend John Anders.

Episode One revealed Six is on the Galactic Authorities Most Wanted List for murder, assault and smuggling.

In Episode Two, Six decided to help defend the Mining Colony. In order to send Ferrous Corp a message so that they wouldn't send any more ships to the planet, he came up with an idea to take out the FCS Deliverance in The Marauder, even though it was probably suicide. He was going to go along with it anyway, however he never got that far as he was taken hostage by Voss, Hagen and Tomas. He was let go after the Ferrous Corp Destroyer was forced to leave.

Episode Six revealed Six used to be part of a rebel group called the "Procyon Insurrection", that is against the Galactic Authority. He unknowingly helped cause a bomb to go off on Hyadum-12 that had been set to blow once they jumped into FTL in the Galactic Authority Destroyer they stole. The bombing killed ten thousand people and Griffin became very ill, throwing up when he heard the news. Then after being told of the plan The General made and being confirmed in his involvement he killed the bomber and then proceeded to kill the rest of the gang, who drew their weapons at him. After they where taken care off he proceeded to put a gun to his own head and pulled the trigger to commit suicide, however the gun was empty.

In Episode Eight, Six used Transfer Transit to go after The General. He tracked him down and killed him, only to realize it was just a clone and the real General is still out there.

In Episode Thirteen, Griffin was revealed to have been the traitor of the crew. Delivering the Raza into the hands of the Galactic Authority.

In Episode Fourteen, it is revealed that Six' real name is Kal Varrik and he is an operative with the Galactic Authority, with Griffin Jones only being his undercover alias so he could become a part of the Raza Crew.

In Episode Fifteen, Kal turns his back on an obviously corrupt system and undertakes measures to break out his friends. However, as the Crew was boarding their escape shuttle, Kal still debated whether or not to join the Raza again when he was shot. Two/Portia and Three/Boone brought him on board where Devon checked his injuries. As he is unable to stop the bleeding completely and the Raza's medical supplies have been seized, the only way to save Kal is to put him in stasis for the moment.

In Episode Seventeen, Six is brought out of stasis and Devon operates to stabilize him.

In Episode Twenty-One, it was revealed that Kal Varrik had been the one that had uploaded a virus to the ship's computer pre-stasis which had disabled the Raza, leaving it dead in space when they had first awakened on the Raza. He had also been the one that had emitted the subspace distress call in order to make the ship easier to track.

In Episode Twenty-Four, Six tries to convince Two to use the blink drive to become intergalactic cops. They would be against both the Galactic Authority and the Corporations.

In Episode Twenty-Seven, Six found Two and got her onto The Marauder. The shuttle had no power, navigation, and comms. After they managed to get communications back online, they contacted the Raza, however they couldn't pick them up yet. They did however learn that Nyx was dead and the Android believed Ryo did it.

Later, Six tells Two that he was sorry for turning them in. Two responds that she knew he thought he was doing what he thought was right at the time. She concludes that doing the right thing isn't always right. She thinks who they used to be is still influencing their present decisions. That they keep fighting their pasts to be better but they keep failing. Six concludes that all that matters is that they keep trying. It's who they are. Eventually, they are rescued by the Raza.

In episode Thirty-Three he is captured and mentally tortured for the location of a secret summit but he rebels and figures out that it was a fake reality which he battles throughout the episode but he eventually is killed by the scientists.

Griffin is both intimidating and imposing to look at. He is tall, with a large muscular build such that in the season finale of season 1 Five states that the only person who has a chance against him in combat is Two, due to her inhuman strength. He has brown eyes. He has stubble on his chin and upper lip and has short, cropped black hair. 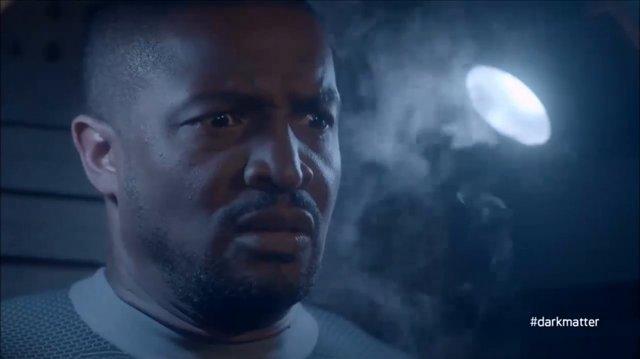 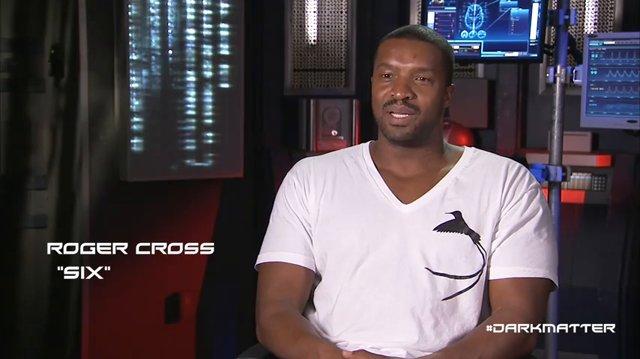 Retrieved from "https://darkmatter.fandom.com/wiki/Kal_Varrik?oldid=14434"
Community content is available under CC-BY-SA unless otherwise noted.