As the crew comes to terms with the true purpose of their mission, they are faced with a dilemma: help the miners against insurmountable odds or abandon them to certain death. [1]

The Raza crew discuss the revelation of their identities as dangerous criminals sent to kill the miners. Four says that their pasts don't matter as they're no longer part of who they are.

The Android and Five discuss the crew and how Five is not on the list, she considers herself a "big question mark". Six attempts to show Three how to fly the shuttle but he does not have the same instincts that Six has.

One and Two talk about what they can do for the miners. One wonders whether they killed the miner sent to acquire weapons and took them for themselves. Two wants to stick to the plan and One questions who made her "team leader". She self-appoints herself leader by stepping up. She later apologises for being aggressive in their previous discussion and demands that he return with the others and not stay on the planet to fight on the side of the miners.

On the planet the crew have told the miners the weapons are from their own cargo, that they'll write off to their suppliers. One tells Mireille that giving them the weapons might just be giving them false hope and wants her to leave and survive. Keeley arrives and wants to crew to join them for a celebration.

Five talks to Two about their memory erasure not being an accident. The Ferrous Corp destroyer Deliverance drops out of FTL into orbit and sends a shuttle to the planet's surface. Two tries to warn the crew, but noone is in the shuttle to hear her message. During the celebration the miners and crew are told that Ferrous Corp have arrived and One runs off to help. Two tries to talk the destroyer down, but Commander Nieman declines and heads to the Raza by shuttle.

One talks to Captain Salehi and requests that he and his men withdraw. Salehi offers to speak to his superiors, but attacks and is beheaded by Four. A gunfight ensues and the miners and Raza crew prevail, taking Sergeant Voss prisoner but not before he notifies the Ferrous Corp destroyer that the Raza crew have taken the side of the miners.

Two tells Five to hide, as she is not meant to be on the ship. Five finds an air duct and begins crawling through while Two and The Android meet Commander Nieman. Five enters Four's quarters and, in a drawer by his bed, finds the box he discovered. Nieman offers for Two to escape with no penalty, even with a bonus.

The Raza crew on the planet enter the shuttle and discover that the Raza is no longer in orbit. They decide to help the miners and Four interrogates the imprisoned Voss. He tells the others that Ferrous Corp's plan is to target the reactor and the Raza crew decide to defend the position. They begin training the miners in the weapons and combat. Six opts to fly the shuttle to the Ferrous Corp destroyer and take it out to make repeat attacks financially not viable. Six returns to the shuttle and is taken prisoner by Voss who as been released by one of the miners.

The base is attacked and a brutal gunfight ensues. In space, the Raza drops out of FTL in the planet's orbit escorted by two Mikkei Combine cruisers. Two orders the Deliverance to stand down. One, Three and Four are about to charge into battle to discover the Ferrous Corp troops are gone, but Nassan has been killed.

Mireille tells One that he's welcome to stay, but he decides to leave. They kiss and wish each other luck.

Back on board the Raza, Two outlines to the others the actions she took while away, including the 99 year lease, which protects the planet and would give the miners a 20% share if Ferrous Corp were to agree to a revenue-sharing deal. The crew decide to head to the nearest space station to repair and resupply. Four opens the box in the privacy of his quarters to reveal a ring. Two and Five discuss their memory erasure and Five reveals she has a memory of uploading a program into the stasis core. She reveals that the memory is not her own, but she does not know whose memory it is, only that it was done because they're dangerous. 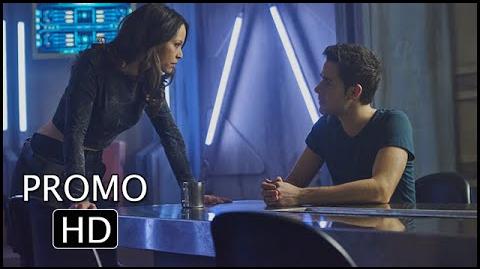 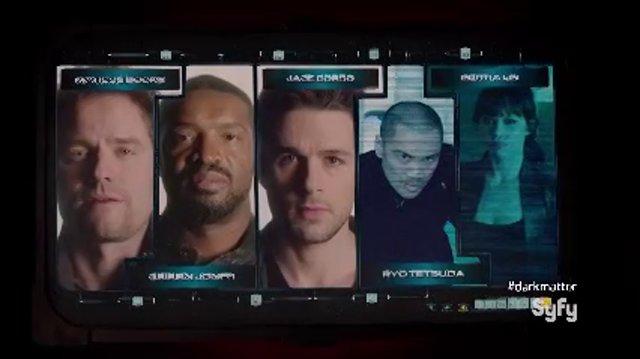 Retrieved from "https://darkmatter.fandom.com/wiki/Episode_Two?oldid=13260"
Community content is available under CC-BY-SA unless otherwise noted.