Start a Wiki
Episode 22: Going Out Fighting is the ninth episode of Season 2 of Dark Matter, as well as episode twenty second of the series.

The crew takes a dangerous mission inside Dwarf Star Technologies in a desperate bid to save their ailing leader. [1]

Two collapses; she finds her nanites are failing and she is dying. The crew contact an employee of Dwarf Star Technologies to discover improved nanites are available. Three and Six infiltrate Dwarf Star HQ to obtain them but are captured and tortured by Alexander Rook. Two, Four, and Nyx use the blink drive on the shuttle to land covertly, but Two is confronted by Rook who sets a new synthetic to attack her. The new model is defeated by the combined efforts of the crew; who transfer the improved nanites to Two via a blood transfer and save her. When Three returns to the Raza, he brings a parasite that was used during torture by Rook, the crew eject the Unknown Creature into space, but they remain intrigued by what research Rook was doing, and what the creature was. 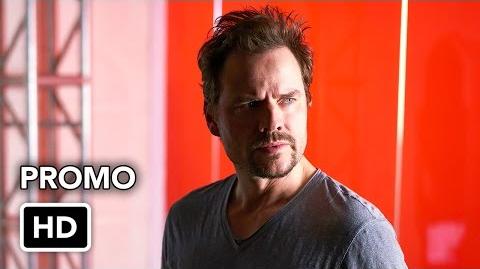 Retrieved from "https://darkmatter.fandom.com/wiki/Episode_Twenty-Two?oldid=14130"
Community content is available under CC-BY-SA unless otherwise noted.