Start a Wiki
Episode 24: Wish I’d Spaced You When I Had The Chance is the eleventh episode of Season 2 of Dark Matter, as well as episode twenty fourth of the series.

The crew races against time to track down and locate a missing Three (Anthony Lemke) and Five (Jodelle Ferland) before the Galactic Authority gets to them first. [1]

Five is kidnapped and Three rescues her on his own and he ends up getting shot in the process. With the Galactic Authority in pursuit, the two flee together. Eventually, Three gets caught by the GA and is threatened with the Raza crew in The Marauder being shot down unless he informs them of the event that took place on Iriden 3. Three gives in and tells them the White hole bomb was originally stolen from Traugott Corp. Afterword, Three is rescued by the Crew.

Back on board after the event, Six tries to convince Two to use the blink drive to become intergalactic cops. They would be against both the Galactic Authority and the Corporations.

Four makes a decision in regards to his memories. He asks The Android to help him upload his neural imprint, so that he may once again remember. 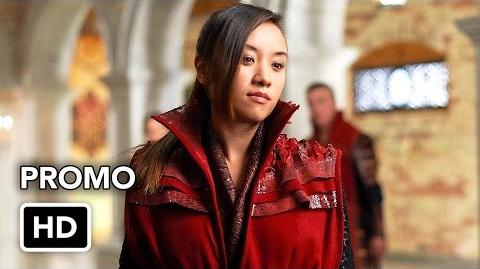 Retrieved from "https://darkmatter.fandom.com/wiki/Episode_Twenty-Four?oldid=13208"
Community content is available under CC-BY-SA unless otherwise noted.