Episode 20: She’s One Of Them Now is the seventh episode of Season 2 of Dark Matter, as well as episode twenty of the series.

Three crew members infiltrate a highly secure facility with the help of their handler. [1]

The crew abduct Calchek so they can hunt down Reynaud to discover the secret of the key she was after. Five, with Three and Four, use Transit Pods installed on the Raza to infiltrate Reynaud’s fortress as clones, Five hacks into the system to find the key is used for a “blink drive” adapter that improves space travel. They steal the adapter but Three and Four are captured and their clones killed. Five’s clone escapes and is rescued with the adapter, which is installed on the Raza. Devon remains on the station with Nyx whilst the blink drive is tested, but he is killed by The Seers. 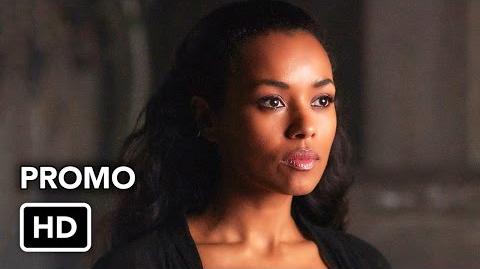 Retrieved from "https://darkmatter.fandom.com/wiki/Episode_Twenty?oldid=13153"
Community content is available under CC-BY-SA unless otherwise noted.