When the ship mysteriously veers off course, suggestions of sabotage abound, fueling the onboard paranoia. A perilous spacewalk is required to bring the ship’s systems back online.

The Android gives a report from the bridge and advises the crew that they will arrive at the space station in 26 hours and 7 seconds. Three wants to sell the ship and split the profits, but the others don't want to sell. Two says they will refuel, resupply and repair and if anyone wants to leave they will be given their share of what is left, but the ship isn't being sold. The crew leave their trays with Three to clean up as they leave the mess hall.

Five approaches Six wanting to play a game but he declines. One also declines. Four closes his door on her without a word. She explores a vent again and finds a storeroom and inside it the dead body of an as yet unknown boy (TJ) around her own age.

The Android scans the body of the boy in the infirmary, stating he appears to be in his mid-teens, and that the temperature in the room was significantly lowered, preserving his body. Two wants The Android to check the body for valuables and jettison him the next time they drop out of FTL, before they reach the station. She says they should put it behind them. After the rest of the crew leaves the room, Two asks The Android to do something for her and not tell the others.

Four is practising with his staff in his quarters when Three enters and tries to arrange a deal between them to sell the ship and so they can proceed alone. Four says it's too soon, they do not know enough about themselves or each other, so for now he stays. But if the day comes when he is no longer pleased with the arrangement, he would still not sell the ship, he would take it for himself.

Five is with TJ's body. She discusses his death with Six. She says she stopped at the room because it was like she knew there was something to find. She speculates that she knew him. Six thinks they are better off not remembering anything, and can have a fresh start. Five reveals that not all memories are gone.

Six takes her to the bridge where Two and The Android are, and says that Five has her memories in her head and that Two knew about it. The entire crew gather in the mess hall where Two tells them that Five has been having dreams that may be their memories, and speculates that everyone's memories may have been transferred into Five's subconscious. Two also tells them that one of Five's dreams involved sabotaging the stasis pods. The Android confirms this by describing evidence she found of a self-deleting subroutine that appears to have targeted their memories. The ship drops out of FTL.

On the bridge The Android describes the malfunction of a relay that necessitated shutting down the FTL. Three suggests that someone may be tampering with the ship, and singles out Five. The Android says the relay is on the outer hull and tampering would require an EVA, which would be impossible during FTL. The Android suggests that tampering with the diagnostics system to fool it into thinking the relay had failed would be simple. Doing this would be an excellent way to disable the ship without doing any real damage. One asks The Android if she can detect lies, to which the Android confirms that she can.

Three takes Four to the vault. While there, he wonders out loud how Four is so skilled with his blades. Four says it's instinct. Six approaches Two in the hall to discuss Five and how she is different to them, and she doesn't belong there. One asks them to come to the mess hall. The Android begins asking questions to determine whether they are telling the truth about not remembering anything, whether they mean anyone any harm, and whether they have sabotaged the ship. They all pass, but Three is still not present. Two, Six, and Four lead him at gunpoint to the mess hall. During his test a further problem becomes apparent; the Raza is being exposed to high levels of Gamma radiation that will kill everyone in three hours.

On the bridge The Android speculates the cause of the Gamma radiation is coming from the remains of a Supernova. She offers two options: first they can jump to FTL, but if the relay is actually damaged, there's a 73% chance the ship will explode. If the diagnostic system was sabotaged, there will be nothing wrong and they can jump safely. The second option is to perform an EVA and fix the relay. The Android volunteers to go.

When beginning the EVA, The Android tells the crew of an FTL override accessible from the bridge. As she exits the ship, the crew sees electro-static discharges on the ships hull caused by the radiation bombardment. She enters a trench where the relay system is housed and replaces the faulty electrical component. The relay coupling re-engages, but before she can return, an electrostatic discharge strikes the trench and renders her inactive. Three argues with the others about rescuing The Android, Six volunteers to help. Three convinces Four to secure the bridge and use the FTL override.

While suiting up, they hear the FTL drive powering up and approach the bridge. The jump preparations are taking time due to the override. Five is able to open the door to the bridge and a stand-off occurs. Five tells One, Two and Six to ignore Three and aim at Four, revealing that Three's guns are empty. She had sneaked into his room and removed his bullets earlier as she was concerned about the way he had been looking at her since learning she has their memories. When he tries to calls her bluff, she pulls his bullets out of her pocket. Four surrenders and the override is cancelled. Two guards Three and Four while One and Six retrieve The Android. Six receives a shock to his arm from an electro-static discharge and his heart stops.

Five gets The Android back online and the Android in turn revives Six with the residual electro-static charge in her body. Later, she resumes examining Three for deception, only to reveal he is truthful; they all are. Whoever wiped everyone's memories also wiped their own, but that may have been an accident, as the subroutine was crude. Two thinks that finding out whoever did it would be next to impossible and they need to move on.

One and Two discuss the "crazy" day in the training room. The Android had tested the faulty part and determined it really was defective; there was no sabotage. They try to make sense of why their memories were erased. One thinks Three was responsible. He kisses Two, then apologises before leaving the room. Five returns to the room where she found the boy's body and opens a box that had been behind him. Inside she finds an electronic card and a gun. Her expression becomes fearful.

The Raza has resumed course for the station and The Android gives a report from the bridge. She states they will arrive 11 hours and 23 minutes and that she programmed an 8am wake up call. Three enters and tells her to stop. Six tends to the burn on his arm. On the station they are heading to, a man questions a bartender about the Raza. The man identifies himself to the bartender as "Jace Corso". 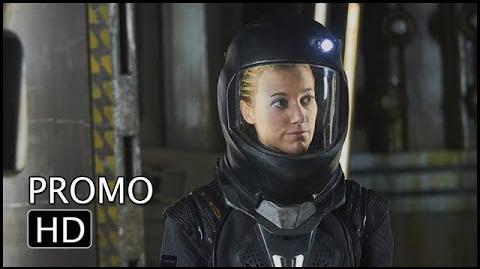 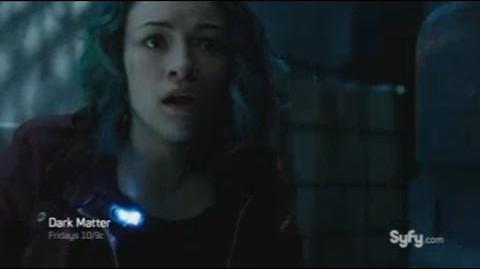