Start a Wiki
Episode 16: I’ve Seen The Other Side Of You is the third episode of Season 2 of Dark Matter, as well as the sixteenth episode of the series.

The neural link triggers a dangerous glitch and the crew start to turn against each other while hiding out in empty space in an effort to lose the GA. [1]

Five enlists the help of Arax, Nyx and Devon when Two, Three and Four collapse. With the Android undergoing repairs, Five activates the Android's hologram in search of answers. She learns that a neural link from a brain scan taken fourteen months ago has caused them to take on their old personas, that of Portia Lin, Marcus Boone and Ryo Tetsuda. Faced with mistrust from her friends, Five creates a neural link of her own using Two's brain scan, and uses Two's most vulnerable memory against her to persuade Two to disconnect her neural link to the ships systems. With the neural link disconnected, they return to their old selves. Arax Nero is revealed to be the "asset". 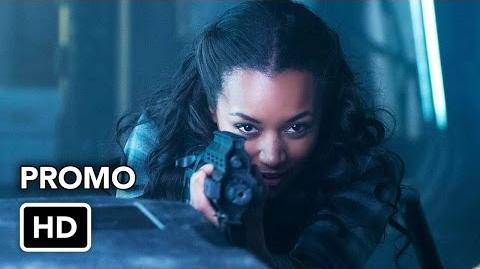 Retrieved from "https://darkmatter.fandom.com/wiki/Episode_Sixteen?oldid=13112"
Community content is available under CC-BY-SA unless otherwise noted.