The crew of a derelict ship awakens from stasis with no memories. Their search for answers leads them to a rebellious off-world mining colony - and a shocking revelation. [1]

The crew of the derelict spaceship Raza, awaken from stasis with no memories of who they are or how they got on board. Naming themselves in the order they woke up in (one through six) the crew try to get their bearings. They soon realise they are the crew of a ship transporting weapons.

When they split up to explore further, Three (Marcus Boone) finds more than he bargained for when he comes across a pod holding The Android. After a one-sided fight, Two (Portia Lin) is able to disable and reboot The Android, minus her security protocols. On learning The Android's is linked into the ship's system, the crew ask for any information on the ship and it's passengers. When they learn the data has been intentionally deleted they are unsure who to suspect. Separating from the group, Four visits the cargo hold. He opens a locker and removes a secret panel at the back, revealing a small mysterious box.

While The Android shows Two (Portia Lin) how to complete maintenance, they pick up another ship on their long range scanner. The ship fires two missiles at the Raza. Performing evasive maneuvers, The Android is able to avoid collision with the missiles. However, during this time the artificial gravity is affected and Five (Das) is injured. Grouped in the med lab, the crew learn The Android was able to recover some of the lost data including the ship's original destination. Setting course, the crew get some much needed rest. While resting, Jace discovers a pendant in his sleeping quarters.

When the Raza enters orbit several of the crew board the shuttle, a Phantom Class Marauder. Two (Portia Lin) and Five (Das) stay behind, while the others make their way down to the planet in the Marauder. On arriving, the crew are greeted by residents of the Mining Colony at gunpoint. After stating they didn't arrive to hurt anyone, they all agree to lower their weapons. The colony residents, Nassan, Keeley and Mireille, tell the crew they are expecting hostiles at any moment. A race called the Raza who are half-human half-reptile and seven feet tall. They are hired by multi-corps to take out "problems" such as the colony who have found themselves on a gold mine, so to speak. A corporation known as Ferrous Corp wants the residents removed. This enables them to use their land to house their own miners so they can stake a claim on an asteroid belt nearby. When asked how the colony plans to defend itself, Nassan informs the crew they purchased a shipment of weapons which they plan to use to defend themselves.

Ready to leave, Three (Marcus Boone) and Four (Ryo Tetsudo) head to the Marauder with supplies from the colony. One (Jace Corso) stops to speak to Mireille, asking her about a pendant she is wearing. Mireille tells One (Jace Corso) the pendant is a symbol of freedom against repression and that it will be worn by the people coming to help them. The pendant is identical to that Jace found in his sleeping quarters. Heading back to the ship One (Jace Corso) confronts the crew, stating they are meant to help the colony. Once back on the main ship a vote is held to decide whether they should provide assistance or keep the weapons. After much discussion it is decided half the weapons will go to the colony and half will be kept.

Several of the crew load up the Marauder with weapons ready to take to the colony. Two (Portia Lin) and Five (Das) meet The Android on the bridge and she announces she has uncovered more of the lost data. The first piece is a corrupted image of an unknown man. The remaining information is names and background information for six of the seven crew members. On seeing the information Two (Portia Lin) and Five (Das) are noteably distressed. Two (Portia Lin) calls over the comms for the crew to come to the bridge immediately. On arrival, The Android shows the data which reveals each of the crew is a criminal and the Raza is not a race, it is the name of their ship. They are the crew of the Raza sent to kill the colony residents. 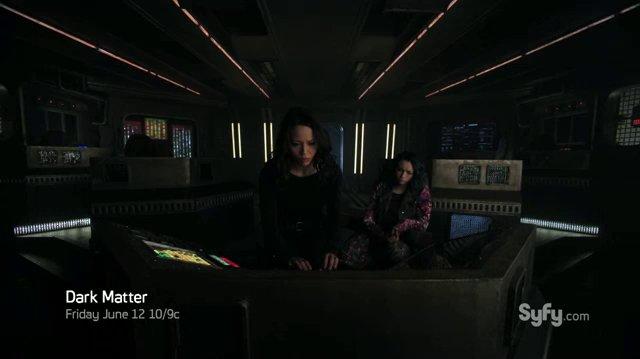 Retrieved from "https://darkmatter.fandom.com/wiki/Episode_One?oldid=13259"
Community content is available under CC-BY-SA unless otherwise noted.