Start a Wiki
Episode 19: We Should Have Seen This Coming is the sixth episode of Season 2 of Dark Matter, as well as the nineteenth episode of the series.

Desperate for money, the Raza crew follow Nyx's lead on an op, only to discover that their target is a personal one. [1]

Nyx recommends the Raza intercept a freighter to steal drugs and raise funds, but once on board she instead rescues her brother Milo and reveals that both of them were subjects of an experiment to enhance their precognition abilities, run by a team of rogue scientists called The Seers. Milo is the best subject and The Seers pursue the Raza to get him back. On rendezvous with the drug dealer the Raza is ambushed by The Seers, who seem to be able to predict their movements. Three and Six in the shuttle avoid the battle by hiding in a corrosive planet atmosphere whilst the Raza jumps away. When the Raza returns to rescue Three and Six, The Seers reappear, disabling their shields. Milo speaks of the oncoming war between the corporations, he wants to be returned so he can influence events. The Raza hands him over and departs, but concerned he will be used for nefarious plans, Milo commits suicide. 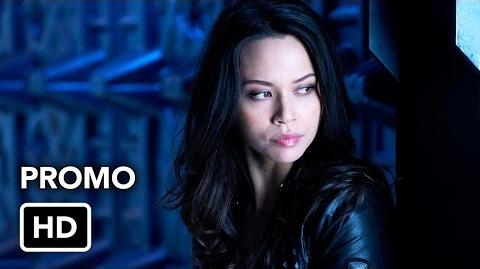 Retrieved from "https://darkmatter.fandom.com/wiki/Episode_Nineteen?oldid=13129"
Community content is available under CC-BY-SA unless otherwise noted.