The past comes back to haunt members of the crew during a stopover at a space station, during which Four makes a stunning discovery, while Two and Five learn that some games of chance come with surprising risks. Elsewhere, Six receives some unwanted attention at a local clinic; and One and Three's attempts to sell the weapons in their cargo hold lands them at a dangerous disadvantage.

The crew of the Raza are discussing what to spend their money on when Two tells them they don't have any money left over after refueling, repairs, and docking fees, which the crew is not happy about. They decide they need to find a buyer for the weapons as well selling anything else they don't need.

The crew stop at a space station to resupply and make repairs. After a very tense landing due to worries about their criminal records surfacing, they dock. Two and Five head in with some supplies to sell for a bit of extra cash, Six heads to a medical center to get his electric burn fixed, One and Three try to find a buyer for their weapons, and Four finds an appraiser to tell him what the ring he found is.

One and Three go to a bar to ask for a buyer for the weapons, which the bartender says he will do for a small fee. Six takes a number to wait in what appears to be a very long line for the doctors office. Two sells the equipment they gathered and turns around to find Five missing, whom she quickly realizes has gone down a floor to watch the "shell game." The man playing the game is quite bad but Five sees through the operators slight-of-hand and tells the man exactly where it is every time. After the third time playing the game when the operator cheats by hiding the pea in his sleeve, the operator leaves and the man gives five a bit of cash a reward for her helping him win. Two asks her how she could do that, and Five thinks she might have played before. Two then sees a sign for a casino and tells Five she might have found an opportunity.

Three is not having any luck hitting on any of the girls at the bar, but laughs even when he gets slapped by one. He and One argue over who is worse. Three says that One is going to get the crew killed by thinking with his heart, while One says that Three is going to get them killed by being selfish. The bartender then interrupts by saying he has found them a buyer.

Four is walking off the ship when the Android catches him. 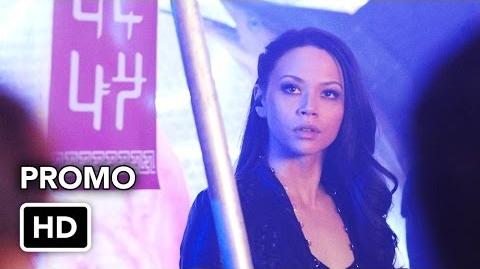 Retrieved from "https://darkmatter.fandom.com/wiki/Episode_Four?oldid=14518"
Community content is available under CC-BY-SA unless otherwise noted.