Episode Fifteen: Kill Them All is the second episode of Season 2 of Dark Matter, as well as the fifteenth episode of the series.

Imprisoned in Hyperion-8, the crew must negotiate attempted assassinations, extraditions, and behind-the-scenes machinations as they plot their escape. Guest starring Ellen Wong as Misaki. [1]

The crew of the Raza engineer their escape from Hyperion-8, and face threats from within the prison. They escape with the help of Delaney Truffault, who transfers the layout plans of Hyperion-8 via eye contact to Three. Four suggests luring a shuttle from the Ishida Empire's cruiser in orbit, and encounters Misaki Han. Arax has his people cause a riot in the prison, and when the inmates are disabled by the sonic device, Two regains consciousness and heads to the control room. The crew reunite at the shuttle and are joined by Arax Nero, Devon and Nyx. Six has a shootout with Lt.Anders after failing to convince him to let them go, and is critically wounded. Now aboard the Raza, Devon tells the crew that he lacks the tools to save Six, and Five suggests that they place him in stasis. They learn via a news broadcast that One (Derrick Moss) has been killed. 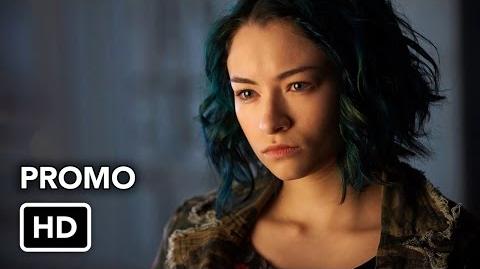 Retrieved from "https://darkmatter.fandom.com/wiki/Episode_Fifteen?oldid=13076"
Community content is available under CC-BY-SA unless otherwise noted.