Start a Wiki
Episode 18: We Voted Not To Space You is the fifth episode of Season 2 of Dark Matter, as well as the eighteenth episode of the series.

The Android goes undercover to help the Raza crew track down a dangerous but familiar foe. [1]

The Android uses her upgrade to infiltrate a Galactic Authority police station and plants a bug, attracting the attention of Inspector Kieken, who is on their case. The crew discover that the real Jace Corso shot One, and is hiding out in an abandoned settlement. Two, Three, Four and Nyx go to get him, but he escapes, setting off a self destruct mechanism. The Raza lands on the planet as does Kieken. Trapped in the tunnels under the settlement, Four is caught by Kieken, and Two captures Corso and executes him. After regrouping, the crew rescue Four. By his actions Six regains the trust of the crew, apart from Three. 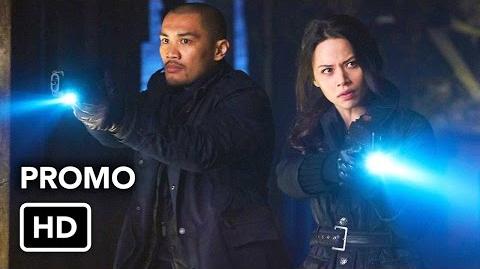 Retrieved from "https://darkmatter.fandom.com/wiki/Episode_Eighteen?oldid=13340"
Community content is available under CC-BY-SA unless otherwise noted.