Emily Kolburn, also known as Five or Das, is a main character that appears in Season 1, 2 and 3 of Dark Matter. She is portrayed by Jodelle Ferland.

Prior to stowing away on the Raza, Das had become an accomplished pickpocket in order to survive. One day she stole a seemingly innocuous piece of metal from a bearded man. Unfortunately for her the object was far more valuable than she had guessed, and the man traced her to her hideout. He killed all but one of the gang of youths she ran with, prompting her and the survivor, TJ, to sneak onto the Raza.

Das, later known as Five, is the crew mascot. She is extremely proficient in electrical engineering and enjoys working with wires, circuits and fuses.

In Episode One, Das awakes aboard the Raza with no memory of who she is. Each of the crew is named in the order of when they each awakened from stasis, so she is given the name Five. She is shown to be quite knowledgeable about random subjects, i.e. medicine and circuitry. When The Android uses evasive maneuvers to avoid being attacked by an unknown ship, the ship loses gravity for a short period of time and Five hits her and loses consciousness when gravity is restored. When Five regains consciousness, the crew is standing her in sickbay. The Android tells them that she has restored some of the lost data from the computer and has determined where the ship is headed. While in FTL, she tells Six that she had a dream about a mysterious door with secrets locked inside. Later, she is seen sleeping with Six sleeping nearby.

While One, Three, Four, Six, and the Android are down on the mining colony, Five works to repair a console on the bridge of the ship. Two tells her that the Android said that that console is fried and asks her if she knows what she is doing. Five remarks that wires, circuits, and fuses come naturally to her, unlike the things she sees in her head. Five tells Two about a dream she had about helping her little brother and carving out the eyes of some people who murdered her father. However, she says the dream doesn't belong to her.

When the others return, the crew sits together in the mess hall and debate whether or not they should help the mining colony defend themselves against the "Raza," a group coming to kill the miners on behalf of Ferrous Corp, by giving them the guns in the ship's cargo hold. Five votes to help the miners, but Three says she can't vote because she's a kid. Finally, Two decides to set half the weapon crates aside for themselves and give the rest to the miners. While One, Three, Four, and Six load the weapons aboard The Marauder, the Android shows Two and Five her progress on the lost data recovery. Two calls everyone to the bridge to show everyone. It is revealed that every one of the crew, except Five, is on the Galactic Authority Most Wanted list. Two then realizes that the Raza is the name of the ship and they were sent to kill the miners, not help them.

In Episode Two, Five stands silently on the bridge while the rest of the crew, reeling from the knowledge of their previous lives, discuss what their options are. They realize that they were hired by Ferrous Corp to kill the inhabitants of the Mining Colony.

Later, Five is sitting alone on the bridge staring at the pictures of the crew when the Android startles from behind before sitting down beside her. The Android asks Five if she is now afraid of the crew. When Five asks is she should be, the Android tells her that they all have violent pasts. Five says that what matters is who they are now. The Android says that while that is an admirable attitude, it is a potentially dangerous and foolish one. Five compares the situation to the Android's earlier attempt and trying to kill the crew based on a deleted program directive. The Android deduces that Five is upset based on physical tells and pheromone levels; Five tells her that she is happy that she is the only one without a computer file and therefore not one of the crew. Five wonders how she got on board the Raza and where she really belongs. The Android tells Five that one day she might be lucky not to be counted part of the crew. Five says that she just wants to be part of the team. Before leaving the Android, Five tells her that telling people she can smell their pheromones won't win her any friends.

Episode Six revealed Five's name to be Das and that she used to be a street urchin that had to stowaway on the Raza with her friend TJ, after a man she stole from killed the members of her gang, leaving Das and TJ as the only survivors although TJ later died from his wounds.

In Episode Twelve, Das remembered a bit more of her past in which she was let out of the Raza airlock and the crew voted on keeping her or not. Griffin, Derrick, and Ryo voted in favor of her while Portia and Marcus were against it. Ryo ultimately had the tie break vote, which leads her to thank him, though he wonders what for. She also later remembered she had skills in programming.

Episode Thirteen revealed that Das made the program that wiped everyone's memories, however it was corrupted which leads Six to assume this wasn't her intention and that she was actually trying to help someone. This is later further clarified as an audio file is discovered which recdords Portia and Ryo discussing murdering someone, presumably Six, who they found out was an undercover GA cop.

In Episode Fourteen, Six informs Five that her real name is Emily Kolburn and that she is sixteen years old. Her parents died in a shuttle accident when she was a baby and she grew up in an orphanage until she ran away at the age of twelve. She has been living on the streets ever since.

In Episode Twenty-Four, Five is kidnapped and Three rescues her on his own and he ends up getting shot in the process. Five tries to aid him with his wound. Then with the Galactic Authority in pursuit, the two flee together.

In Episode Twenty-Five, Five frees Four's brother, Hiro from his mother's imprisonment. This leads to Hiro giving Ryo the throne to the Principality of Zairon.

In Episode Twenty-Six, Commander Delaney Truffault helps the Raza crew get into the space station EOS-7. So that they can stop Ferrous Corp from bombing the Council of Corporations. Truffault has Five pose as her assistant to sneak inside. While there Five looks for the bomb and is soon found and attacked by Zairon guards, only to be saved by an illegally modified android named Arien. The two quickly get along as he is touched by Five's kindness and he appears flirtatious with her. Unfortunately Arien is revealed to be the bomb and there is no way to safely turn it off. Arien spaces himself to save Five and explodes.

Commander Nieman's bomb is stopped, however that isn't the end as it's revealed that Ryo has other plans. He has EOS-7 overloaded and steals the blink drive. As explosions start happening around the station Truffault finds Five and they seemingly escape together.

Das is average height with shoulder-length blue and green wavy hair. She has light blue eyes and a pale complexion. Das wears colorful clothing including a grey jacket with pink and purple sleeves and multicolored patterned pants. She usually has a long-sleeved plaid shirt wrapped around her waist.

She also wears some kind of earring on her right ear which can be seen when her hair is put back behind her right ear. 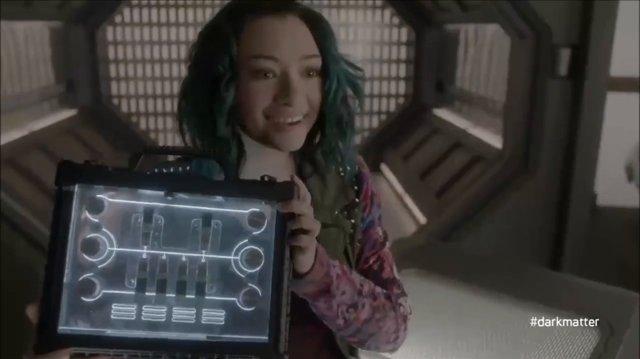 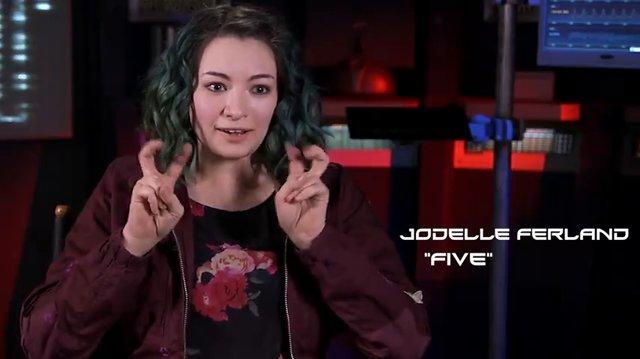 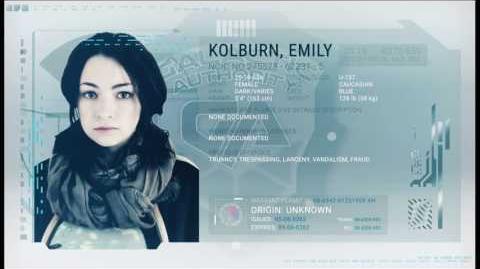 Retrieved from "https://darkmatter.fandom.com/wiki/Emily_Kolburn?oldid=13812"
Community content is available under CC-BY-SA unless otherwise noted.