One, also known as Derrick Moss, is a main character that appears in Season 1 and Season 2 of Dark Matter. He is portrayed by Marc Bendavid.

Derrick Moss was a billionaire CEO who underwent reconstructional surgery to make himself look identical to the lowlife hitman Jace Corso so he could take Corso's place and board the Raza after his wife, Catherine Moss, was murdered, apparently by Marcus Boone. After the Raza's crew accidentally underwent a memory wipe, Derrick was the first one to emerge from stasis, and was designated "One" for this reason. Similarly, Boone was designated "Three", but of course, One had forgotten that he believed Three had murdered his wife, and that he hated him.

One is both charming and goofy. He is the moral compass for the crew of the Raza, showing both integrity and the will to fight for what is right even if it seems to be a lost cause. He may make mistakes but he always means well.

In Episode One, One is the first to wake from stasis. He has an altercation with Portia before meeting Marcus, Das, Ryo and Griffin. Having established that none of them have any recollection of who they were the group decide to name themselves by the order they woke up in, one through six. Later, the crew take rest in their quarters and One finds a pendant hidden under his pillow. While visiting the Mining Colony he sees Mireille wearing an identical pendant and asks her what it symbolizes.

In Episode Two, One helps the mining colony hold off against the attacks from Ferrous Corp. When the mining colony became safe under the protection of the Mikkei Combine, One left with the rest of the crew, but not before sharing a kiss with Mireille.

In Episode Three, the Android conducts a lie detector test on One, which he passes. Three puts up a fight over being tested which results in One pointing a gun at his head until Two indicates he should lower it. Later, One helps Two train before impulsively kissing her. He apologizes after Two pulls away.

The final moments of Episode Three reveal One looks identical to a man named Jace Corso, who is searching for the Raza.

In Episode Four, One meets Corso. It was revealed that before he lost his memory, One had cosmetic surgery to make himself look exactly like Corso to infiltrate the Raza crew.

In Episode Eight, One got to see how he originally looked like through Transfer Transit's cloning technology that uses DNA to make copies. This DNA reader also allowed One to learn that he was really a man named Derrick Moss who is the CEO of CoreLactic Industries. He also learned he had a wife who had been killed by Marcus Boone.

In Episode Fourteen, after waking up in Hyperion-8 with Five, Derrick Moss' attorney gets him out of jail. She helps him get access to his wife's murder records and he begins to question Three's involvement when the only evidence is one security guard's testimony that contradicts Three's past criminal records. He then meets Darius der Hoeven who is the acting CEO of his company. One asks to talk to the witness, who Darius agrees to find, only to turn up the next day claiming the guard died that night. One tells Six his suspicions about the whole thing and how he doesn't feel he can trust anyone anymore. Six quips that maybe he just spent too much time on that ship. Before Six leaves, he says 'You are who you are. Never forget that.' The line appears to leave Derrick puzzled at the meaning.

Later, One gets ready to leave to return to his old life. He answers the door only to be met by Jace Corso, who pulls a gun on him. One is fatally shot four times in the chest and once in the head. When the crew of the Raza escape from prison and learn of One's death, they are obviously grieved, even Three, and they swear revenge. Eventually, they track down Jace Corso, and despite his insistence that keeping him alive will be the only way they ever find out who hired him to murder One, Two decides that killing the guy who pulled the trigger would have to be enough, and shoots Corso in the head, killing him and avenging One's death.

One is tall with short, black hair and dark eyes. He has a slim but muscular build and a light stubble on his chin. 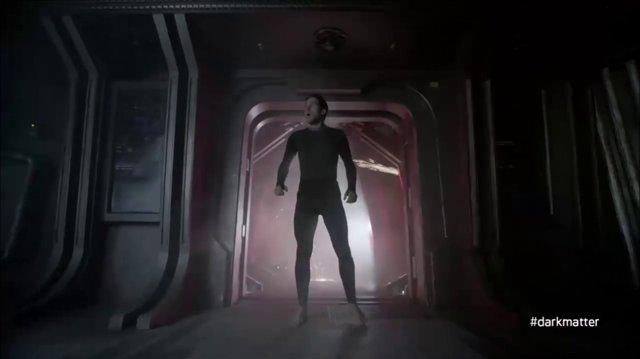 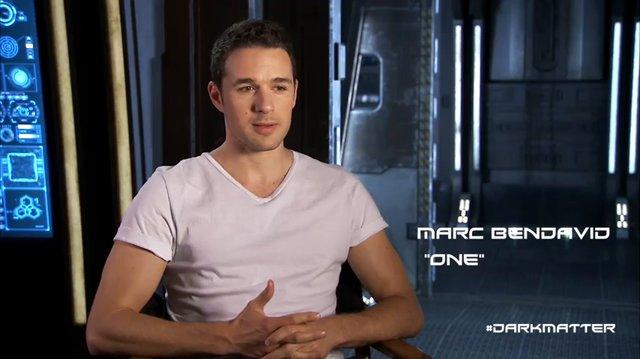 Dark Matter - Season One - Meet One

Retrieved from "https://darkmatter.fandom.com/wiki/Derrick_Moss?oldid=12163"
Community content is available under CC-BY-SA unless otherwise noted.