Hewlett first gained fame for his role as Grant Jansky in the 1996 Canadian TV series, "Traders" and a year later, appeared as David Worth in the 1997 Canadian psychological horror film Cube.

He later played bad-tempered airplane pilot, Douglas Hunsiker in the 2011 movie, Rise of the Planet of the Apes.

In addition, Hewlett is also known for his role in the 1988 horror movie, "Pin" or "Pin: A Plastic Nightmare" as well as the 1991 science-fiction movie, "Scanners II: The New Order".

Hewlett currently has a recurring role in Dark Matter (TV Series) as Tabor Calchek, a merchant who also serves as the team's handler.

Hewlett was born in Redhill, Surrey, England, United Kingdom and moved with his family to Canada when he was four years old with the Hewletts settling in or around Toronto.

Hewlett got his first computer in his mid-teens and became a self-described "computer nerd".

While in St. George's College Choir School for Boys in Toronto, Hewlett met American-born and future sci-fi director, Vincenzo Natali and the two began creating movies together while forming a strong friendship that remains to this day with Hewlett going to appear in the majority of movies that Natali has directed, prime examples being the 1997 psychological horror movie, "Cube" and the 2009 science-fiction horror film, "Splice".

Hewlett later dropped out of high school in his senior year to pursue careers in both acting and computing, beginning his acting career in 1984 when he was only sixteen years old, making his debut appearance in the 1980s TV series, "The Edison Twins" with his acting career continuing to this day.

Hewlett was previously married to Canadian actress Soo Garay with the two divorcing in 2004.

In 2008, Hewlett married his long-time girlfriend, film producer Jane Loughman who like Hewlett is British-born.

The couple have a son, Sebastian "Baz" Flynn Loughman Hewlett who was born during the filming of the Stargate Atlantis Season 4 finale episode, "The Last Man" and a dog named "Mars" with Mars appearing in Hewlett's directional debut movie, "A Dog's Breakfast".

In addition to being an actor and voice actor, Hewlett has in recent years embarked on directing and writing various films, his directional debut being the 2006 dark comedy, "A Dog's Breakfast" which he also starred in.

In recent years, Hewlett has also written and directed two movies, "Rage of the Yeti" which Hewlett also appeared in and which was released in 2011.

Hewlett's latest movie, "Debug" which he wrote and directed was released in 2014. Unlike "A Dog's Breakfast" and "Rage of the Yeti", Hewlett did not appear on-screen in any kind of role whatsoever.

Hewlett has also created a YouTube channel named Fanatical in which he often posts various videos of himself discussing anything and everything geek-related.

He has also started posting videos of himself and his young son, Baz playing Minecraft together with the Minecraft videos being titled "Minecraft Let's Play" with Hewlett using the name, ""Roddy Rhino", and Baz using the names "Super Pig" and "IronHam". [1]

Hewlett is also a huge fan of the long-running British science fiction series, Doctor Who and his favorite Doctor is Tom Baker.

The show was what originally sparked his love of the science fiction genre with Hewlett's own dreams of working in science fiction later becoming a reality when he was ultimately cast as Rodney McKay in Stargate SG-1 and later Stargate Atlantis with the role of Dr. McKay becoming Hewlett's best known role to date and also giving him international recognition among sci fi fans. 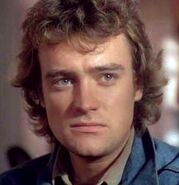 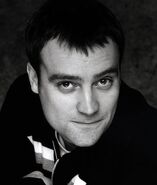 Retrieved from "https://darkmatter.fandom.com/wiki/David_Hewlett?oldid=14409"
Community content is available under CC-BY-SA unless otherwise noted.